Applicants must complete and submit the application formonline including:

After submitting the online application form, applicants will be sent an email with their scheduled audition date and time. On audition day they must present:

Within a week after auditions are finished, applicants will be notified of their application results via email. Successful applicants (including those aged 26) will be granted a two-year position in the JOSB.

Membership requires a six-monthly fee of 250 € every year.

Unsuccessful candidates may be contacted for future openings and they will be included in the instrumental bag of the Orchestra.

The “Jove Orquestra Simfònica de Barcelona” (JOSB) is conceived as a new pedagogical, social and cultural music project which aims at training young instrumentalists ages  from 16.

The JOSB is committed to offering complementary training to musical education through practice in the orchestral ensemble in Barcelona, as well as professional high-level technical and artistic training.
It affords future professionals the opportunity to develop technical and artistic skills by offering an atmosphere of social interaction that will favour a comprehensive educational experience for young musicians granting equal rights and supported by an educational and cultural organization where youths can share knowledge, dreams, effort and talent.

The Barcelona Youth Symphony Orchestra has been founded by the musical association Barcelona Ciutat de Música. The programme is open to young people of all nationalities with the aim of promoting social and cultural values, as well as fostering the love of music in our society. 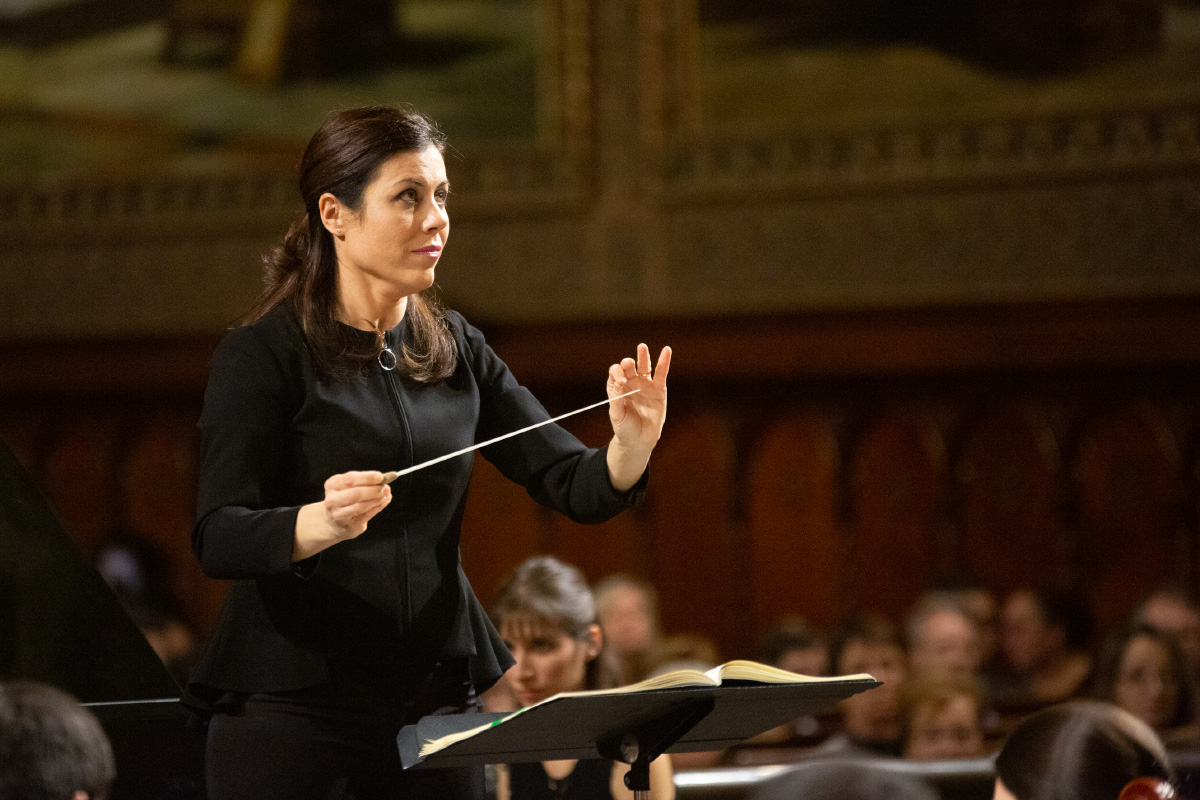 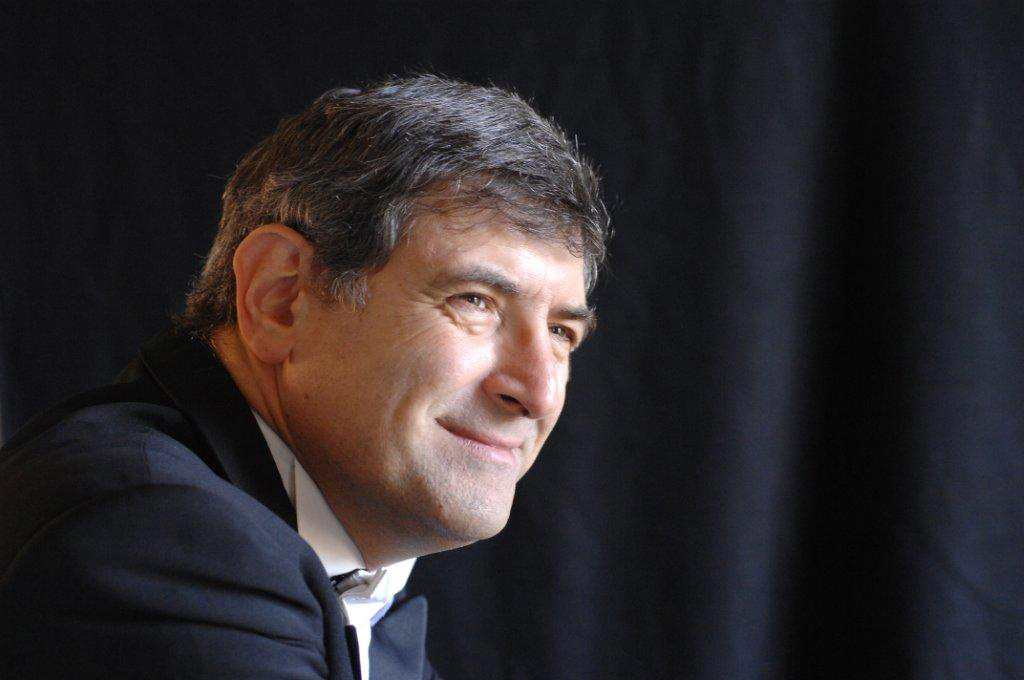 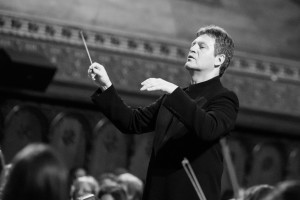 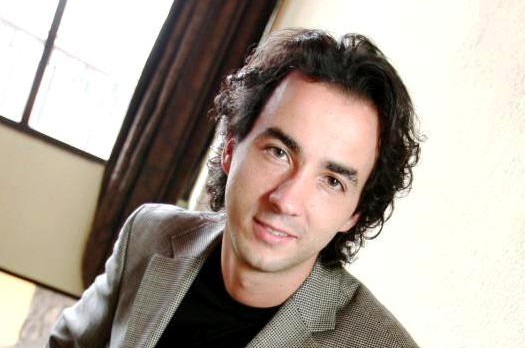 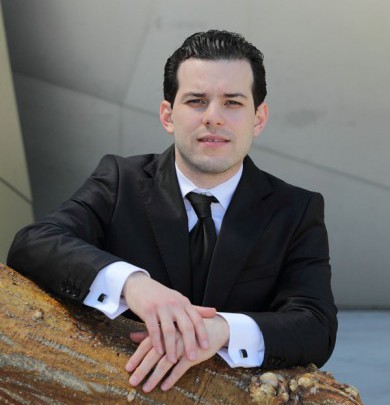 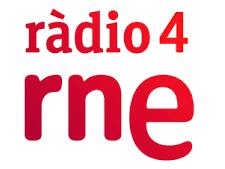 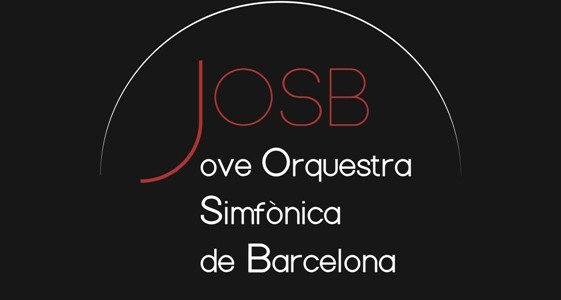 The Jove Orquestra Simfònica de Barcelona, ​​is a young orchestra composed of musicians from the ages of 16 to 26, who performs intense rehearsals on two consecutive weekends prior to the first concert and thus performs a season of free concerts at the city ​​of Barcelona with an annual minimum of six different symphonic programs, not having planned its activity at Christmas, Easter, or summer.

It has a team of specialized teachers that allows a complementary training to the musical education of all its members and that participates actively in the partial essays, in this way, the musicians strengthen their learning as instrumentalists in the orchestra. Of this team of professors they are permanent members of the artistic council of the JOSB together with the principal conductor, Albert Carbonell i Sauri, composer, Beatriz Cambrils, flute of the Symphony Orchestra of Barcelona and National of Catalonia, and Matthias Weinmann, violoncello of the Orchestra Symphony of the Gran Teatro del Liceo.

The JOSB is structured under the conductor and music director Carlos Checa, and regularly invites conductors to expand the training of our musicians, such as Josep Caballé Doménech, Joshua Dos Santos, Salvador Brotons, Manuel Hernández Silva, Rubén Gimeno, Íñigo Pirfano or Michael Thomas.

As an educational, cultural and social project, the JOSB has the vocation to offer concerts in different spaces and auditoriums both in the city itself and outside of Barcelona. The orchestra has performed in venues such as the Sala Foyer of the Gran Teatro del Liceo, L’Auditori, the Axa Auditorium, the Eduard Toldrà Auditorium of the CMMB, the Paraninfo of the University of Barcelona and the Assembly Hall of the Civic Center “La Sedeta” “, Its usual venue for rehearsals, which has excellent acoustics for rehearsal, and which was the former rehearsal room of the Municipal Band of Barcelona. The JOSB debuted with great success at the Palau de la Música Catalana in October 2017 and returns to this emblematic hall next season 18/19, on the other hand, will return again next season to L’Auditori de Barcelona, ​​with two different syphonic programs.

The orchestra receives institutional support from the Barcelona City Council through the Institute of Culture and also thanks to the signing of an agreement made in 2015 for the cession of spaces in the Sedeta Civic Center. On the other hand has signed a collaboration agreement for four years with the prestigious University of Barcelona, ​​and in the 2015-2016 season received the institutional support of Spanish Cultural Action (ACE) thanks to its visitors program.

On the other hand, the JOSB is financed through the Barcelona Ciutat de Música Association, thanks to the contributions of the members of the orchestra, who contribute 41 euros per month, or in semi-annual installments of 250 €. These contributions can be extended up to two consecutive years where the musicians can again choose to perform the tests to continue in the orchestra, or stop paying that fee at the time the musician stops belonging to the JOSB.

Finally, JOSB has collaborating and protective members who make donations and private companies that sponsor the orchestra. In the 2017-2018 season, JOSB has the sponsorship of the Social Work of the Sanza Clinic, the company Auto-Beltrán Mercedes and the company Gratacós.

The JOSB not only complements young people in their musical training and offers free concerts to the public, the orchestra also develops since its foundation a partnership with various organizations in the city, has performed charity concerts for Cáritas thanks to the Constantinian Order of Sant Jordi and a concert for the Pascual Maragall Foundation another for the AFAB (Alzehimer’s Association of sick family members) and has also collaborated with the TV3 Marató in the recording of a video clip and a theme included in the 2016 CD that sold more than 220,000 do you copy.

enhancing their training as instrumentalists in the orchestra. The members of this team belonging to the artistic committee of the JOSB are Albert Carbonell i Sauri, composer, Beatriz Cambrils, flute in the Barcelona Symphony Orchestra and the National Orchestra of Catalonia, Carlos Checa, conductor and artistic director of the JOSB, and Matthias Weinmann, cello in the Symphony Orchestra of the Gran Teatre del Liceu.

This project has a pedagogical, social and cultural focus and the JOSB is committed to holding concerts in different venues in Barcelona and abroad. Rehearsals take place in La Sedeta community centre, former rehearsal hall of Barcelona Municipal Band.

Rehearsals are intensive for each programme in phases of two consecutive weekends. They start with sectionals, followed by tutti and subsequent concerts.
All the members will be given a program with scheduled rehearsals, concerts and conferences at the beginning of each term. The JOSB season will comprise the months of October, December, January, February, May and June. There will be no activities at Christmas, Easter or during the summer holidays. 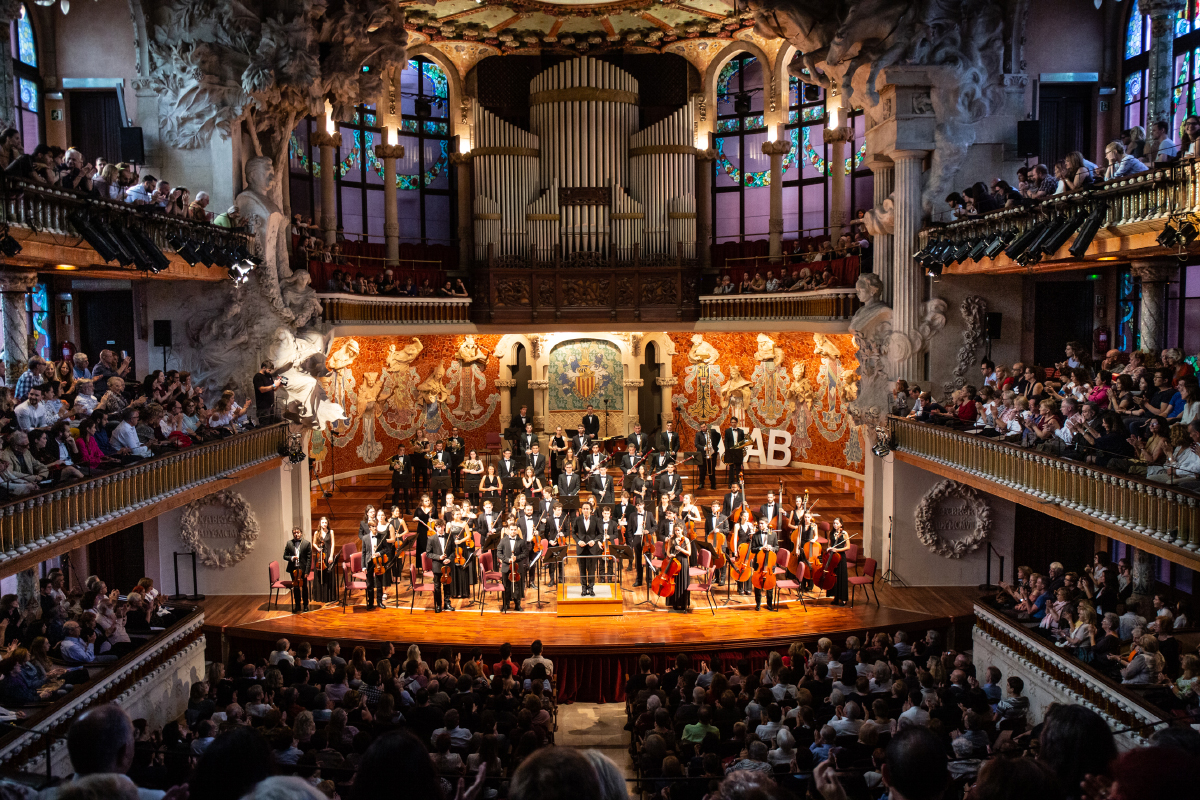 Opening concert of the VII Season at the Palau de la Música Catalana. 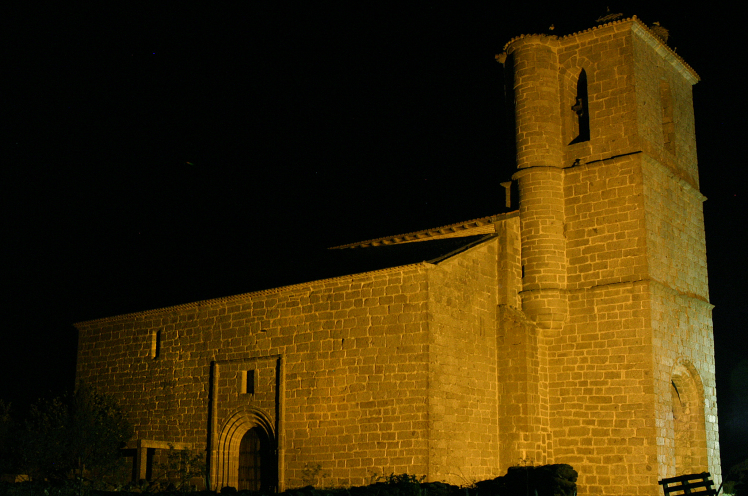 The jove Orquestra Simfònica de Barcelona will offer fur different symphonic programs at the Palau de la Música Catalana in the 21/22 season. It is great news for the JOSB to collaborate with the Palau and with different fundations such as AFAB, Cáritas, Banc dels Aliments  and Mans a les Mans to offer a large… 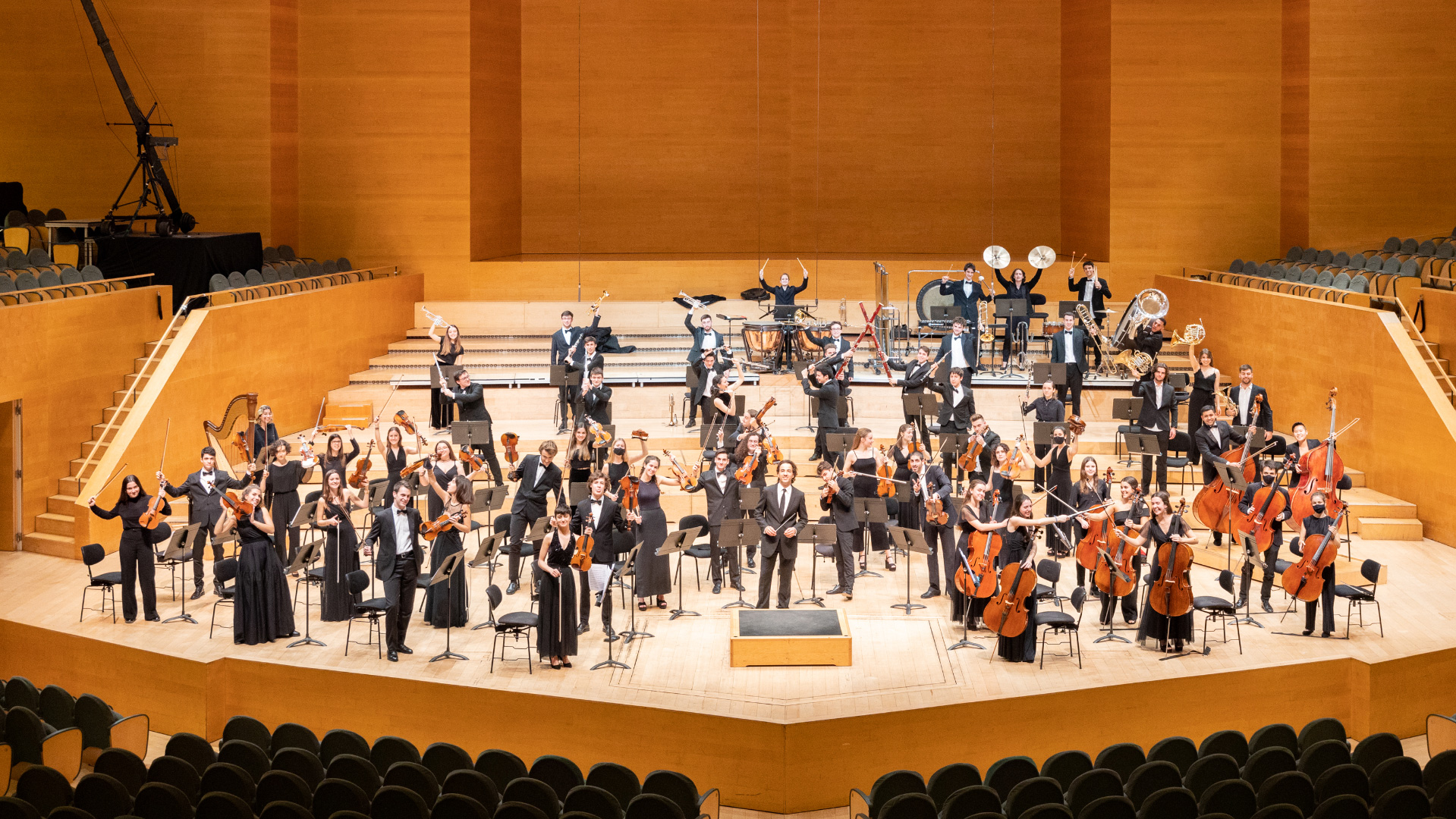 JOSB Tour from October 8 to 12!! The Jove Orquestra Simfònica de Barcelona, conducted by  Carlos Checa  with a wondefull program that includes Suite no.1 Peer Gynt by Grieg Op. 46,  and the Symphony No. 9 in E minor Op.95 by A. Dvorak, will perform at the Palacio de Congresos de Ávila,  Palacio de Congresos…