Christian Vásquez will conduct  the JOSB in the program núm.3 of the VI Season. The internationally renowned Venezuelan maestro will conduct the Symphony No. 3. “Heroica” by Ludwig Van Beethoven on February 7, 2021 at the Barcelona Auditorium, offering a solidarity concert in favor of UNICEF.

The  VI Season will start on October 2020  with two concerts conducted by Carlos Checa and two masterpieces; the Symphony No. 3 in F major Op. 90 by Johanes Brahms and Suite No. 2 of “The Three-Cornered Hat” by Manuel de Falla.

We wait for you !

Auditions  Season 20/21, with at least six different symphonic programs, as well as concerts in the Auditorium of Barcelona, ​​Palau de la Música Catalana among others.

Applicants must complete and submit the application formonline including:

After submitting the online application form, applicants will be sent an email with their scheduled audition date and time. On audition day they must present:

Within a week after auditions are finished, applicants will be notified of their application results via email. Successful applicants (including those aged 26) will be granted a two-year position in the JOSB.

Membership requires a six-monthly fee of 250 € every year.(October-April)

The Trombone, the Tuba and the Percussion have a reduced half-yearly rate in JOSB).

Unsuccessful candidates may be contacted for future openings and they will be included in the instrumental bag of the Orchestra.

Sorry, this entry is only available in CAT |.

On Sunday, February 2 at 6:00 p.m. at the Auditori of Barcelona, ​​Carlos Checa with  the Jove Orquestra Simfònica de Barcelona will performance a premiere of the young composer Pau Riedweg,  “LLàgrimas de tardor”, Aires Gitanos, by Pablo Sarasate, who will play José David Fuenmayor as a solo violin, and Symphony No. 4 in F minor by Piotr Ílitx Chaikovski.

This concert is offered by the JOSB as program No. 3 of its fifth season of concerts, and on the occasion of a solidarity cause carried out by the Pere Closa Foundation. The proceeds from the sale of tickets for this concert will go to an educational project for the children of this Foundation.

We wait for you! 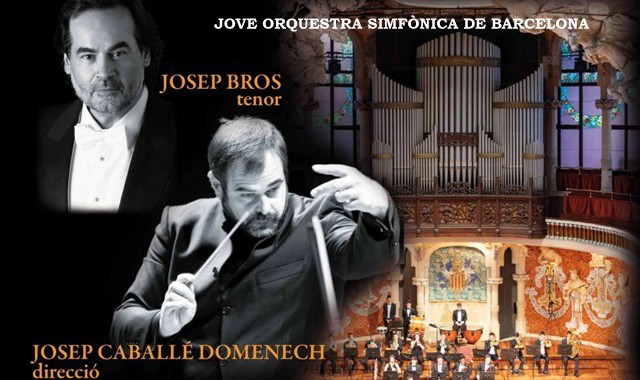 It crowds us of emotion make possible at our fifth season this as special concert with emblematic works of the repertory by Verdi, Donizetti, Puccini, Sorozabal and many others.

We expect you the Monday 2 of December at the 20h , want to crowd with you all the Palau! 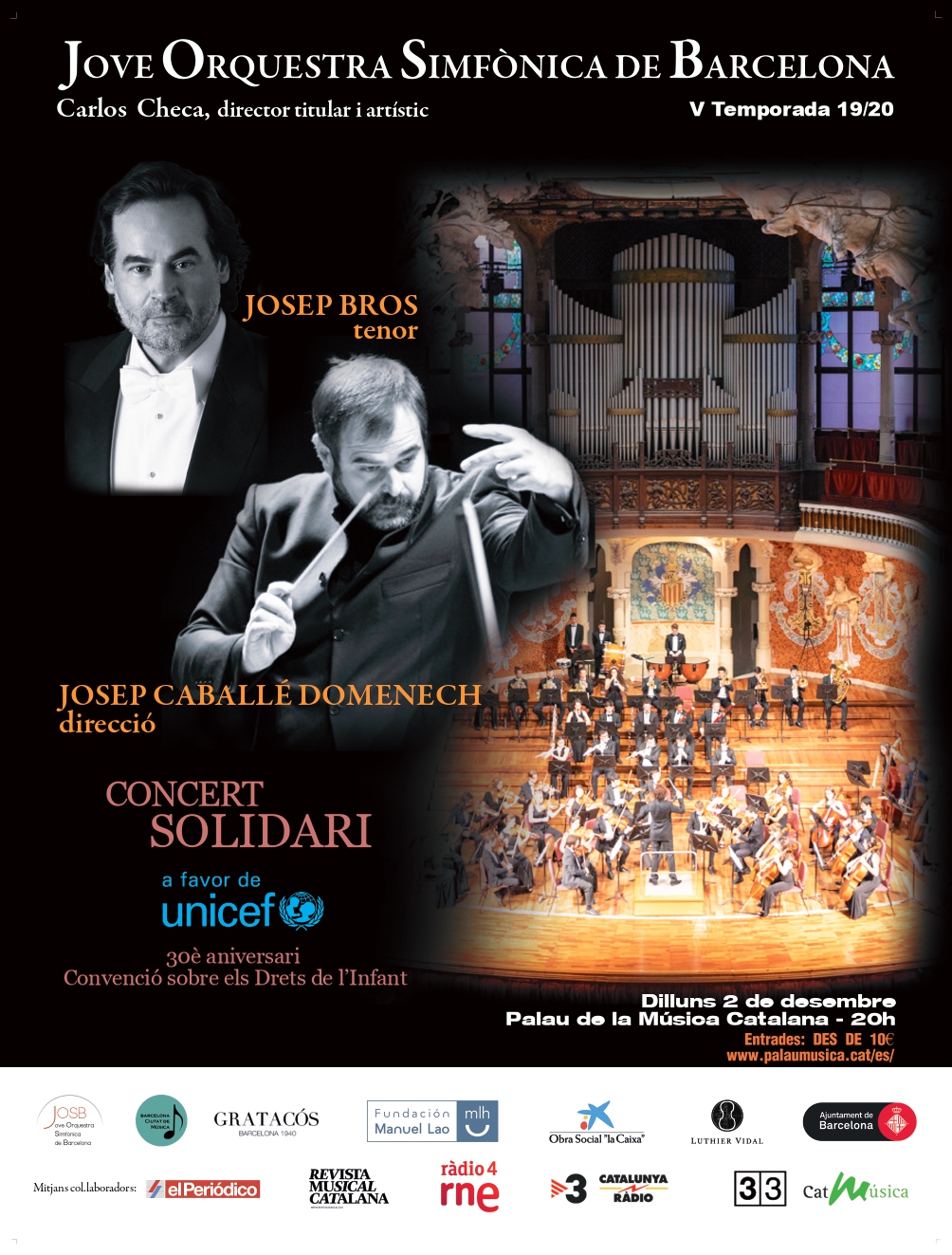 On the occasion of the new season the Melómano Magazine, interviews Carlos Checa and asks the readers a question. What do you want to know about JOSB?

Íñigo Pirfano (Bilbao 1973), belongs to that generation of conductors who combines the energy of the youth with the maturity of years of experience.

He completed his M.A. in Philosophy at Universidad Complutense in Madrid. Then he studied Orchestral, Choral and Opera Conducting in Austria and Germany with Karl Kamper, Karl-Heinz Bloemeke, Sir Colin Davis and Kurt Masur.

He was the founder of the ‘Madrid Academic Orchestra’ and its principal conductor for 15 years. For his work leading this orchestra, in 2012 he was awarded with the ‘Young Leadership Award’ by the ‘Rafael del Pino Foundation’ (Spain).

Parallel to his career as an orchestra conductor, in recent years he has emerged as a sought-after essayist and speaker. He has published three books: ‘Ebrietas. El Poder de la Belleza’ [Ebrietas: The Power of Beauty] (2012), ‘Inteligencia Musical’ [Musical Intelligence] (2013) and ‘Música para leer’ [Music for Readers] (2014), with a prologue by Plácido Domingo. He is a regular speaker at some of the most important forums of Spain and Latin America, as Fundación Telefónica, Banco Santander, IESE Business School, la Caixa, International Centre for Leadership Development, Zurich Group, Davivienda, Janssen Cilag or Fundación Rafael del Pino.

We invite you to the closing concert of the IV Season of the Barcelona Youth Symphony Orchestra, on June 16 , at 7 pm , conducted by  Francesc  Prat .

The concert is free and the program includes masterpieces of music such as the Mendelssohn Opening “The Hebrides”, the  symphony No. 10, or the Symphony  no. 4 by Franz Schubert.

Francesc Prat regularly collaborates with the Basel Symphony Orchestra, the RTV Symphony in Slovenia and the BCN216 as well as being the principal music director of the Chamber Orchestra of Menorca Island and the Ö! Ensemble für Neue Musik. He also works with Basel Sinfonietta, the Nederlands Kamerorkest, the Madrid Symphony Orchestra, the Essener Philarmoniker, the National Classical Orchestra of Andorra (ONCA), the Royal Philharmonia of Galicia, or with ensembles like the Phoenix Basel Ensemble or the Collegium  Vocale Gent.

We wait for you! 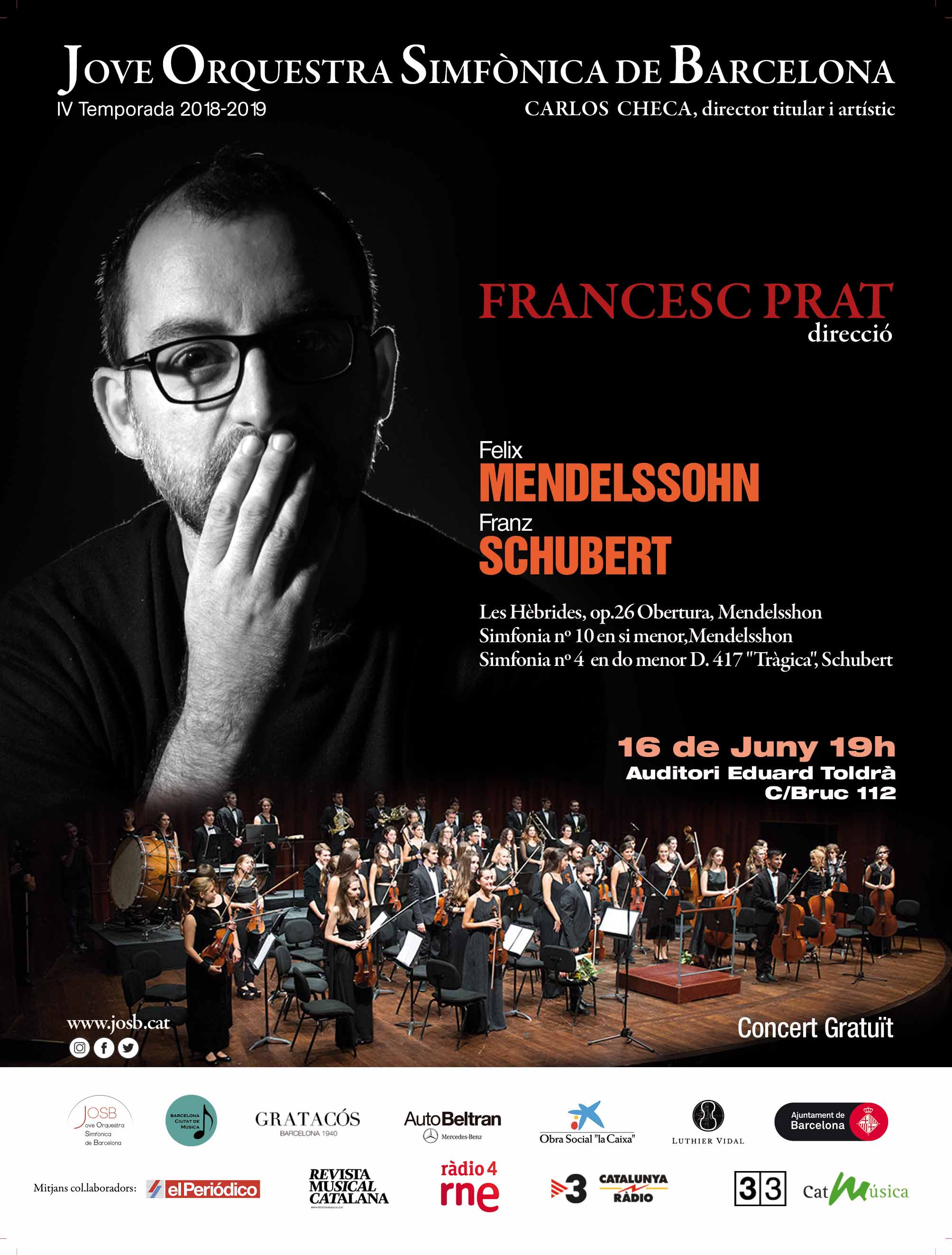 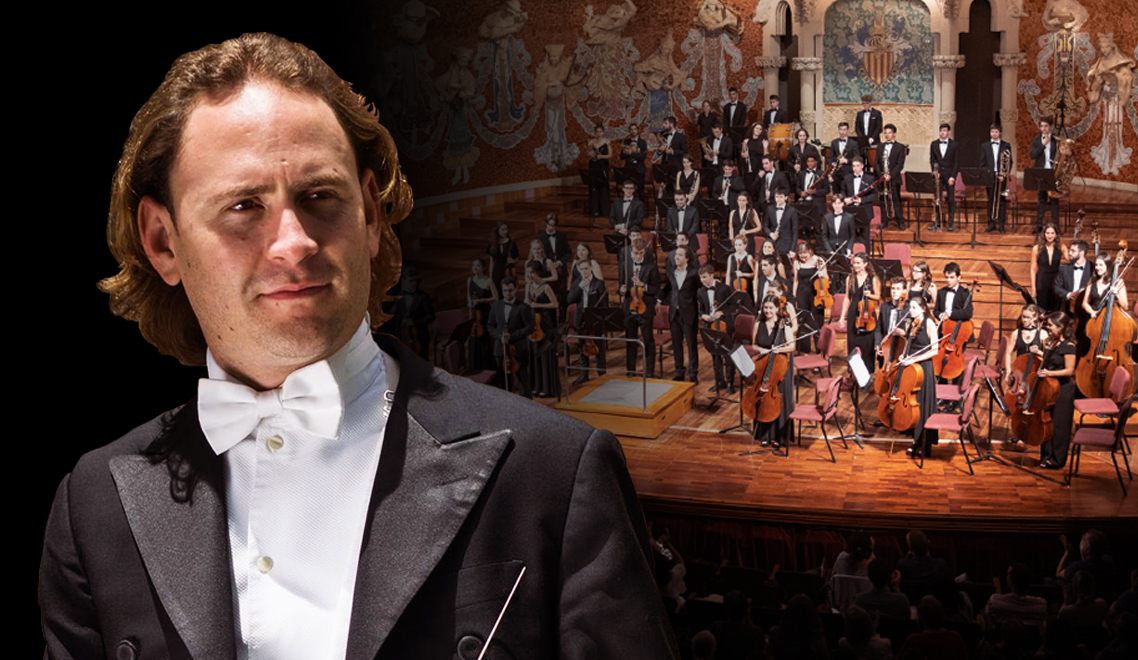 Ticket sales at the Palau box office or with this link:
https://www.palaumusica.cat/ca/christian-vasquez-josb_836891

The profits from the entire box office of this concert will go to a social project of Caritas Barcelona. 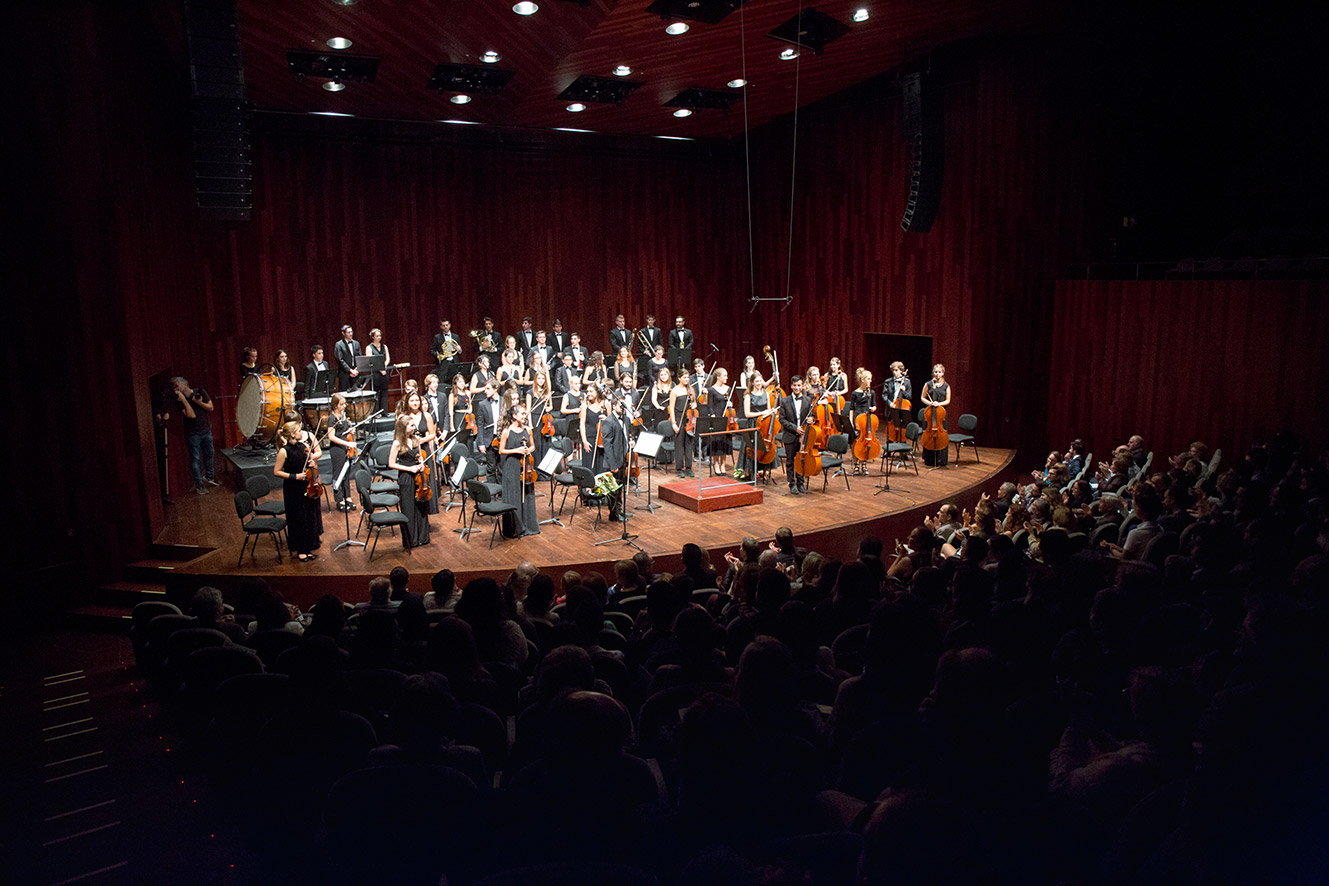 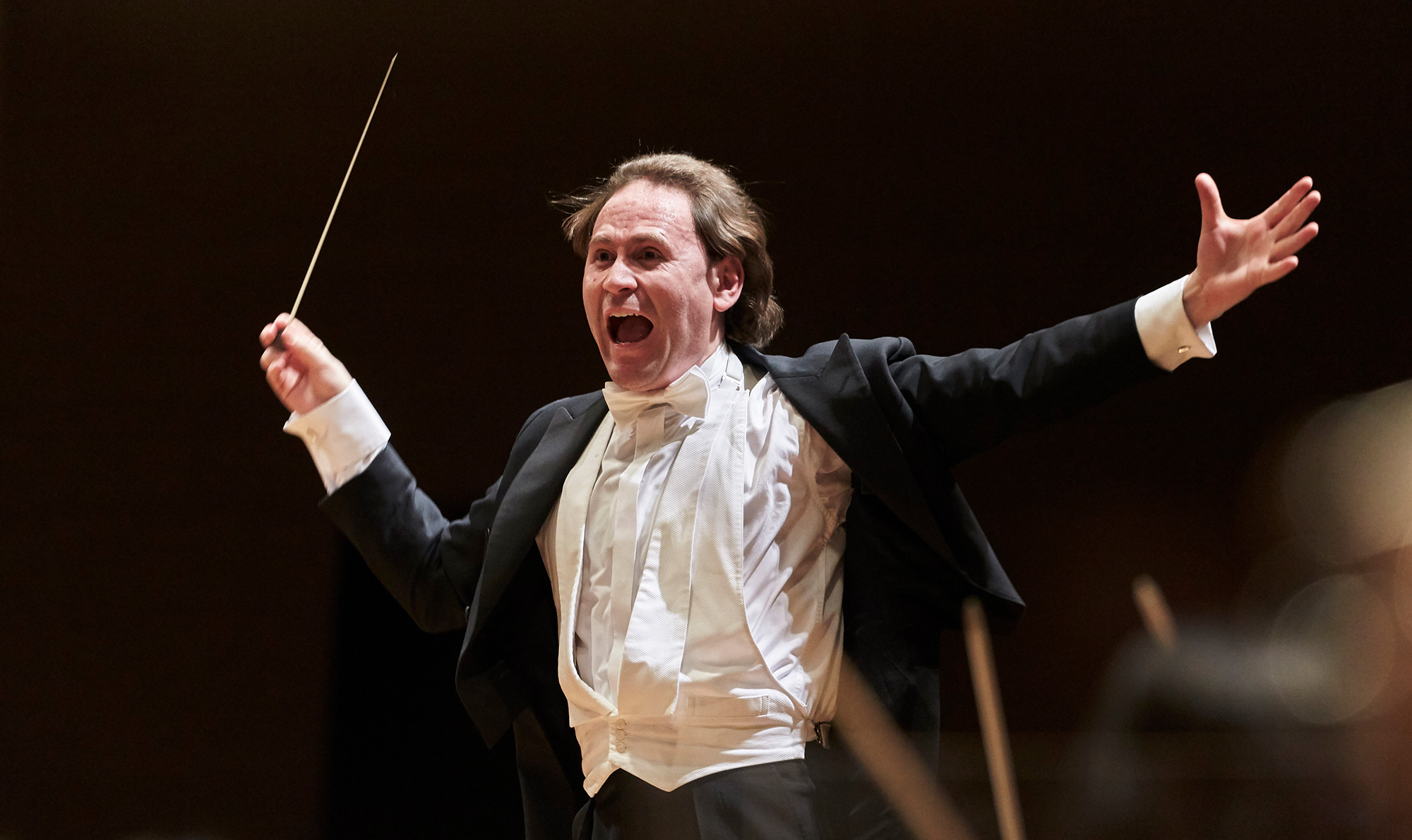 Christian Vásquez will conduct  the JOSB in the program núm.3 of the VI Season. The internationally renowned Venezuelan maestro will conduct the Symphony No. 3. “Heroica” by Ludwig Van Beethoven on February 7, 2021 at the Barcelona Auditorium, offering a solidarity concert in favor of UNICEF. 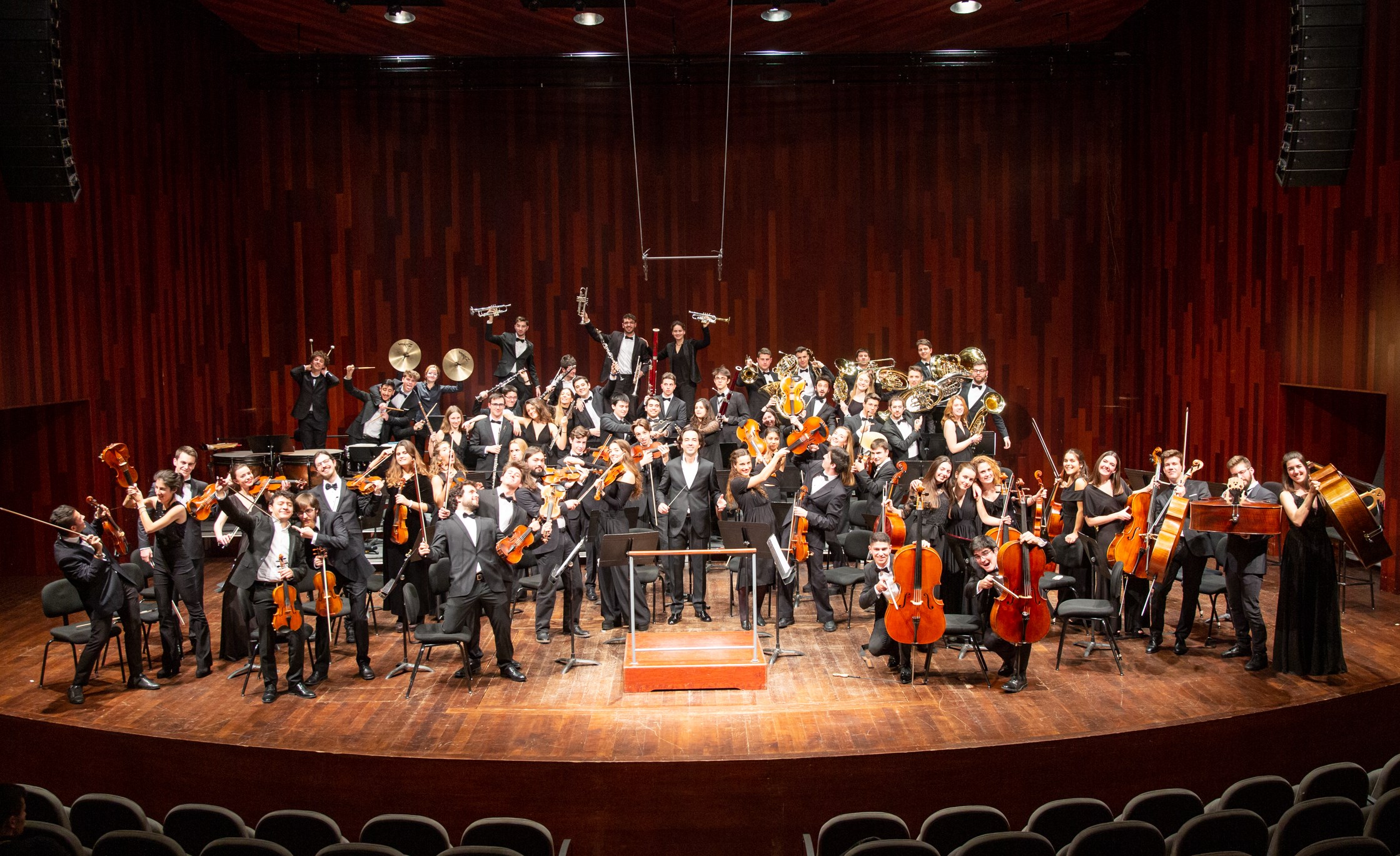 The  VI Season will start on October 2020  with two concerts conducted by Carlos Checa and two masterpieces; the Symphony No. 3 in F major Op. 90 by Johanes Brahms and Suite No. 2 of “The Three-Cornered Hat” by Manuel de Falla. Sunday  11 Oct, Centre Cívic La Sedeta, 18.30h Monday 12th Oct , Sta….